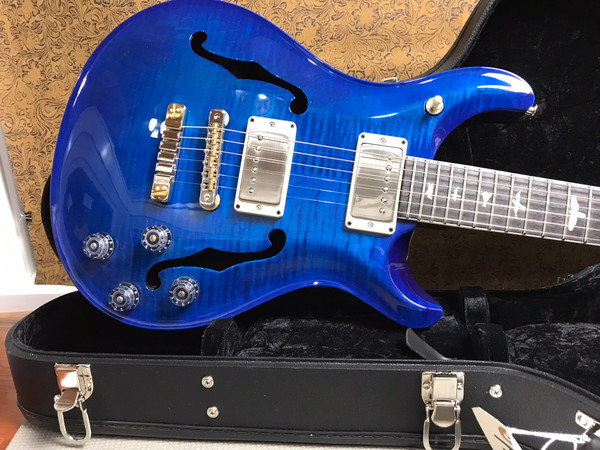 Buy with Confidence from Guitar Maverick!
We are Authorized PRS Dealers

Just arriving..., this NEW PRS 594 Hollowbody Guitar.. This is NOT the Piezo Version, so please take note!  This is a Custom Old School Color Royal Blue, that is not available to order from PRS.. Yes that's right, Guitar Maverick Scores Another Unicorn..
This Strong Flamed Non 10 Top and Back is the PERFECT Color and TONE Machine!!

The McCarty 594 Hollowbody II brings a new set of features to one of our most beloved models: the Hollowbody II. With fully-hollow construction, the Hollowbody II is a resonant guitar with warm, woody tone. The details carried over from the McCarty 594 model impart vintage character to this already classic instrument. 58/15 LT pickups, which have now been through the TCI (tuned capacitance and inductance) process, ensure that these guitars are clear and musical while dual volume and push/pull tone controls offer plenty of versatility. The zinc two-piece bridge and vintage-style tuners anchor this guitar and stay true to the promise of the McCarty family.

“One of my sayings is that everything that touches the string is God – well, that’s really the bridge, the nut, and the tuners. The updates to the McCarty family make a huge difference in their tone. The guitar sustains longer and the tone has more character,” said Paul Reed Smith.

In the late 1980’s, Paul Reed Smith called on Ted McCarty to consult with him on guitar design and production techniques. He not only served as a mentor but became a great friend of Paul and everyone he met at PRS. In 1994, PRS released the first McCarty, an instrument that incorporated the full spectrum of techniques and knowledge Paul had gained from Ted as well as his own experiences as a guitar builder.

At Guitar Maverick we Know RARE GUITARS and you just found Another!   This is #55 of 100 of the Fabled Dragon II!

At Guitar Maverick we Know RARE GUITARS and you just found Another!   This is #80 of 100 of the Fabled Dragon II!

Buy With Confidence from Guitar MaverickWe are Authorized PRS Dealers... We work hard everyday trying to source not only current production PRS Guitars, but also the Bes…

Buy with Confidence from Guitar Maverick...

Buy with Confidence from Guitar Maverick!We are an authorized PRS Dealer Another Custom Color New Arrival! This is a 594SC S2 Model, and you are going to LOVE this one..…

Buy with Confidence from Guitar Maverick... We are Authorized PRS Dealers. Just arriving, the Piezo SE Version of the Paul Reed Smith Hollowbody II.These are amazin…