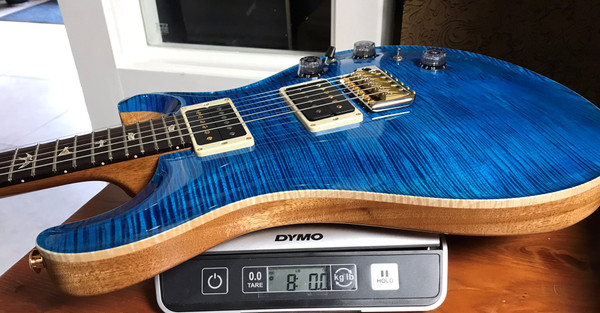 Buy with Confidence from Guitar Maverick!

We are Authorized Dealers for PRS Guitars...

This is a Piezo version Custom 24 in a Aquamarine with a Spectacular Squiggly Maple 10 Top!  You cannot order this guitar with These options...as the  Pattern Regular Neck Shape and  Hybrid Hardware are not current options.  Perfect Weight at 8lbs on the Money!!

The Custom 24 Piezo is a 24-fret solidbody piezo-equipped guitar that effortlessly achieves classic humbucker tones and authentic acoustic sounds in one instrument. The added versatility of PRS’s patented tremolo gives musicians a new a unique tool to add to their lineup.

The Custom 24 Piezo has two output jacks, allowing guitarists to plug into their favorite electric or acoustic guitar amp or DI into a soundboard. By utilizing the separate blend control, the tone of the 85/15 pickups can also be combined with the piezo acoustic sounds through a single output. With a nearly infinite range of tones and the added versatility and reliability of PRS’s proprietary tremolo bridge, the Custom 24 Piezo is a perfect “go-to” guitar for players of all kinds.

For 2020, PRS has updated this model with TCI-tuned pickups and nitro over celluose (CAB) finish.

It is VERY RARE that these Limited Instruments find there way to the market place because they are so very collectible.  This Black Gold Smokeburst is Like NEW in ev…

Buy with Confidence from Guitar Maverick! We are Authorized Dealers for PRS Guitars... Another Great and Unusual Guitar Just Arriving from Paul Ree

Buy with Confidence from Guitar Maverick!We are Authorized PRS DealersJust arriving..., this NEW PRS 594 Hollowbody Guitar.. This is NOT the Piezo Version, so ple…