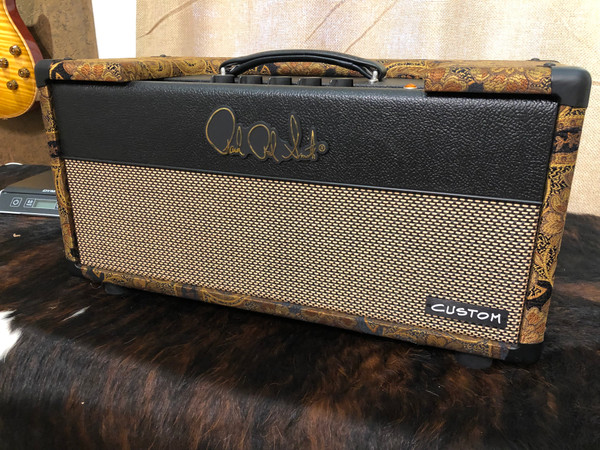 Buy with Confidence as we are an Authorized PRS Signature Dealer!

Well here you go!  Recently discontinued, the PRS Blistertone 50w is truly the workhorse HIGH GAIN offering designed from Doug Sewell's origninal Design. Tons of Famous Touring Artists have found this to be the GAIN and TONE machine for their performances.   This Particular Amp was part of my PRS Sales Reps, demonstration arsenal..  Never Sold, so this one has a FULL PRS Warranty.  Save a Ton on this Amp, with the knowledge you are buying a New, Authorized and fully Warrantied Paul Reed Smith Amp!

Hard to find, and especially in the PAISLEY Tolex!

Paul Smith and Doug Sewell have resurrected one of Doug' most successful Sewell amps”the Blistertone 50. The PRS Blistertone 50 tube amp head represents the evolution of Sewell' original design, released nearly a decade ago. This Blistertone 50 is a versatile, modern single channel amp that can give you clean to strong overdrive tones using your guitar' volume control. The cleans have a shimmer and sparkle reminiscent of higher wattage British amps. The overdrive tones are strong with carefully tailored, large lows that remain tight when pushed. The master volume is specially designed for overall volume, punch and clarity at lower settings. The tone stack (tone control circuitry) is unique to the Blistertone and allows a wide range of modern tone tweaking. Options include either reverb or an effects loop.

Here we have a very unique Private Stock!  NOS, and Never Sold!  Just arrived at Guitar Maverick! The Angry Larry Finish is Flawless, and Striking!  This …

Buy with Confidence From Guitar Maverick! We are an Authorized Signature PRS Dealer.. Just arrived in a Whale Blue! Occasionally we get some Extra  Production Gui…

Rarely do you get the opportunity to acquire such a special intrucment as this "Family" Guitar, a Modern Eagle 1 Prototype directly from Paul Reed Smith himself. This is …

Just arriving!  Brand New and Ready to GO!! Real Tube Tone to Match Your Style Sonzera [Portuguese]: from som (sound), meaning a cool and/ or stunning sound (in …

Buy with Confidence From Guitar Maverick! We are an Authorized Signature PRS Dealer.. Just arrived in a Whale Blue! Occasionally we get some Extra  Production Gui…

Buy with Confidence From Guitar Maverick! We are an Authorized Signature PRS Dealer..   Just arriving at Guitar Maverick, another Beautiful 594! More pic…

Buy with Confidence We are an Authorized Fender Custom Shop Dealer   Just arrived!     If there were a Mount Rushmore of Stratocaster Masters, St…