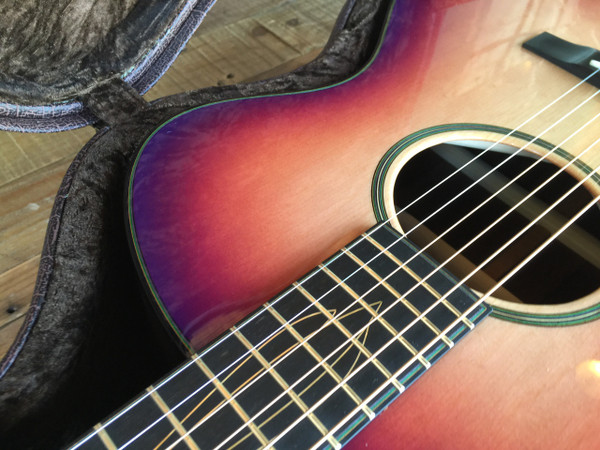 WOW!  We brought this guitar from Summer NAMM Show directly from Bedell and could not resist adding to our inventory!

This thing is Amazing!  The Subtle Gold Inlays are super Classy! The Sitka Spruce Top is Beautiful with a Gorgeous Bursting Stain..

and the Brazilian Rosewood is simply Amazing!  Truly one of the best sounding and classiest looks we have had from Bedell!

We can only speculate on the story of the one-of-a-kind Esperanza  Brazilian rosewood tree. Its age, unique coloration, and magical tonal qualities suggest it grew in NE Brazil during the colonial period – sometime during the 16th – 18th centuries. The slight orange accents in the very dark, almost black grain suggest the Esperanza tree grew on a ranch, owned by the fazendeiros and was left buried.  With its rich mineral content, it was most likely by or in a river.  In the late 1950's, along with several other Brazilian rosewood logs, the Esperanza log was shipped to a church ornament company just outside of Madrid, Spain. There is was stored and left to air dry. It was not until two decades later, when the company began processing and marketing tonewood for stringed instruments, that the true music magic of this Esperanza tree was uncovered.

Brazilian rosewood has long been heralded the pinnacle of guitar body tonewoods. Many of the tonewoods in the rosewood family grow in the tropics, but none has ever matched the magical Dalbergia nigra of Brazil. It's life, the decades of being buried in a wet environment and the slow natural aging of the Esperanza tree somehow has resulted in the finest music wood of all. You can hold a tonewood set between your fingers and feel it vibrate. It has a bright glass-like ring that sustains. And it has that unique Brazilian rosewood aroma.

With this prodigy of Brazilian rosewoods, we have created the Rio Power Dread, the Rio Bold Orchestra, and the Rio Regal Parlor. They are extraordinary Brazilian instruments. Due to Esperanza's denseness we can use thinner more responsive back. A hand selected extra stiff salvaged Bearclaw Sitka spruce soundboard and tone bars are hand carved for 100% tuned tops. The one-piece Honduran mahogany neck is dovetailed into the body with a compound taper similar to how vintage guitars were made in the 1930's. And a stunning Rio Burst to is applied compliment the magic of the music these instruments produce.

Back and Sides Brazilian Rosewood

BUY WITH CONFIDENCE! Guitar Maverick is an Authorized Signature PRS Dealer.   THIS GUITAR HAS BEEN STOLEN!!!! Please contact me if you come across…

Buy With Confidence from Guitar MaverickWe are Authorized PRS Dealers... We work hard everyday trying to source not only current production PRS Guitars, but also the Bes…

Buy with Confidence from Guitar MaverickWe are Authorized Fender Custom Shop Dealers!Just Arriving this Custom Shop Closet Classic Relic is based on the 1966 Fender Strat…

Buy with Confidence from Guitar Maverick... We are Authorized PRS Dealers. Just arriving, the Piezo SE Version of the Paul Reed Smith Hollowbody II.These are amazin…

STELLA ROSE RED LEATHER AND RED ROSES! You Probably Have NOT seen this one before!  We asked Jodi to make us these after seeing a Certain Country Star using it! JO…

At Guitar Maverick we Know RARE GUITARS and you just found Another!   This is #55 of 100 of the Fabled Dragon II!  Note the original Certificate is n…

Buy With Confidence from Guitar Maverick We are an Authorized McPherson Custom and Carbon Fiber Dealer! Just Shipped to  Guitar Maverick... NOW IN STOCK  prod…

STELLA ROSE GRAY LEATHER AND RED ROSES! JODI HEAD is know the Rock Stars around the World!  You have seen her straps on TV, in Concert and in your friends Living Ro…

This NEW PRS Private Stock was on Display at the PRS Booth at the Winter NAMM booth January of 2017! What a Show Stopper!  Once of the most photographed guitars in …