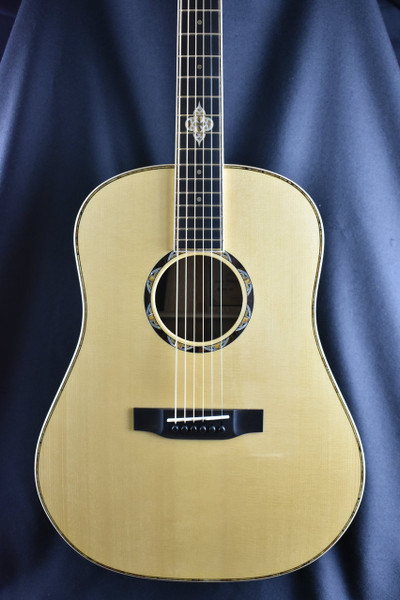 We are an Authorized Bedell Custom Dealer

Just look at this Brazilian Monster.  We have been involved in the beginning on this particular Guitar.

While Tom Bedell was securing the world’s largest collection of legally documented Brazilian rosewood, he visited a magnificent cathedral in Segovia. Marveling at the acoustics, he vowed to design a huge sounding dreadnought. The backs are hand selected Brazilian, named Puerta de Iglesia (Church Door) as the stunning sap wood was popularly used in cathedral doorways centuries ago. The tops are individually harvested European spruce. Due to the rarity of these woods we must restrict this offering to a limited edition of six guitars.

An endangered and carefully protected species, Brazilian rosewood (Dalbergia nigra) is the most precious of tonewoods. Simply called "rio" by Brazilians, it is highly regarded among luthiers and collectors for its magical tonal character and deep, rich beauty – and it is vigorously regulated; it is protected with the same level of regulation as ivory.  Brazil – recognizing  the value of its rosewood trees – outlawed the exportation of  Brazilian rosewood logs in the late ‘60s. The ban  was a blow to luthiers and guitar manufacturers worldwide, since it was widely believed that there was no better combination for acoustic guitars than Brazilian rosewood paired with spruce. From that point onward, fewer and fewer players would have the chance to own a Brazilian rosewood guitar, and most would have to settle for other rosewood substitutes… and if you’ve ever played an acoustic guitar crafted from Brazilian rosewood, you know there is no substitute.

In June of 1992, Dalbergia nigra was listed in Appendix I of CITES as an endangered species, preventing the import and export of the precious tonewood within 180 member nations, including all of Europe. Fortunately, years before the ‘60s Brazilian ban and decades before CITES, the trees that live again in the magnificent Bedell guitars were already safely resting and patiently aging in Spain.

In May of 2001, Brazilian law made it illegal to harvest Brazilian rosewood in the wild, effectively limiting the supply to existing stocks. And since import and export of the wood is severely restricted by 1992 CITES convention, it is incredibly difficult to find pre-Convention Brazilian rosewood for acoustic instruments that will allow for travel across international borders. As a result of these rigorous regulations, when the existing finite and scarce Brazilian tonewood supply is exhausted… the “rio” is gone forever.

The Atlantic Forest of Brazil (also known as the Mata Atlântica or the Atlantic Rainforest) is critically threatened. More than 85% of the original forest has been destroyed, however, Mata Atlântica still remains one of the richest, most biologically diverse forests, and is home to a large number of species that can be found nowhere else on the planet. Major threats to Mata Atlântica include illegal logging, conversion of forestland to agricultural uses, and urban and suburban development. Brazil’s eastern seaboard is home to 70% of Brazil’s population, so the fate of the forest flora and fauna is interwoven with economic wellbeing of the local population. Currently, less than 2% of the whole biome is under protected status.

European spruce is often thought of as the ultimate wood for classical guitars because of its light weight and stiffness, coupled with its very pale, even coloration. From Europe; northwest Norway and Poland eastward, and also in the mountains of Central Europe, to the western edge of the Alps, and southeast in the Carpathians and Balkans, to the extreme north of Greece. Provides a sound rich in overtones, focused, full of nuance and tone color — a sound often preferred by fingerpickers. It offers a quicker response and greater headroom than Engelmann. Usually takes a slightly longer period of playing time to open up than Engelmann or Sitka. Very light in color. Pale, even coloration.

PLEASE NOTE, THE PICTURES SHOWN ARE  IN STOCK! This GUITAR JUST ARRIVED From  Bedell Guitars in Bend Oregon!   Over a half century ago several Bra…

Buy with Confidence from Guitar Maverick WE are Proud to be an Authorized Bedell Custom Shop Dealer!   Bedell Guitars is pleased to present the incredible soundin…

Buy with Confidence from Guitar Maverick WE are Proud to be an Authorized Bedell Custom Shop Dealer!   Bedell Guitars is pleased to present the incredible soundin…

PLEASE NOTE, THE PICTURES SHOWN ARE  IN STOCK! This GUITAR JUST ARRIVED From  Bedell Guitars in Bend Oregon!   Over a half century ago several Bra…

Buy with Confidence from Guitar Maverick We are an Authorized Fender Custom Shop Dealer   This is the New Chris Stapleton Edition Fender Princeton Amp!  WE h…

Buy with Confidence!! Guitar Maverick is an Authorized PRS Dealer!!We know Rare PRS and you just found one too!!Here we have a Really Special Paul Reed Smith! The 10…